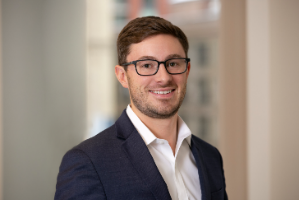 As Project Manager in Bohler’s Boston office, Zack helps owners and developers identify opportunities to become accomplished. By tackling site challenges and leveraging industry change, Zack and his team keep land development projects moving forward, transforming the Boston community and beyond. With more than 11 years of experience in site civil engineering design and permitting, Zack leads a growing team of talented engineers and designers who bring clients’ visions to life in the multifamily, mixed-use, commercial, and life sciences sectors. Zack drives the development process, guiding projects from due diligence and conceptual design through site design, entitlements and construction.

Who is Zachary Richards?

Zachary Richards has been a ULI Boston/New England member for 6 years since 2016 when he joined Bohler’s Boston office, which had four employees at the time. The Bohler Boston team is now 20 strong, with Zack serving as a Project Manager.

Graduating from Bucknell University in 2010 with a degree in Civil and Environmental Engineering, Zach found himself in a rough job market given the lingering effects of the 2008 recession. Working as a golf caddy (since high school) part-time, however, eventually allowed him the opportunity to meet the CEO of TRC, an environmental remediation and solar focused engineering firm. This connection would lead to Zack joining TRC and working on environmental investigations, solar land development, and site design.

Zack would eventually join Bohler’s Boston team, rounding them out to five employees. This transition allowed Zack to get more hands on with residential, commercial, and industrial projects, while also specializing in site design. Bohler was very supportive of Zach engaging in industry organizations and encouraged him to attend networking and engagement events. ULI stood out to Zack and he decided to focus on being active in one major organization rather than spreading himself thin with several. Zach joined ULI and the rest is history.

Having moved to the city when he joined Bohler, Zack became more involved with ULI after participating in ULI’s mentorship program in 2017. He furthered his ULI involvement at council events, before transitioning into YLG planning meetings. At the time, the meetings would be at Stantec in-person, allowing him to develop friendships through drinks and trivia nights, which led to him eventually helping to organize events and build greater ties to the network.

Zack’s dedicated ULI involvement eventually led him to co-chair the Young Leaders Group. Although his tenure was disrupted by the pandemic, Zack made the most of his time as a co-chair for the YLG group: this included his introduction of the group’s Meet A YLG, where members would give mini presentations on themselves and/or projects of interest they might be working on. Despite the challenges COVID presented, Zack remained committed to the YLG group and is now serving on the ULI Americas YLG Steering Committee-Network Subcommittee, where he and other YLGs focus on creating connections and consistency across the national district council YLG groups.

This year, in addition to continuing to raise his family, Zack is looking forward to the continued growth of Bohler, both for his team and clients, as the market continues to drive demand for the company’s work. He is also excited for the prospect of getting back to in-person events at ULI and continuing to engage Bohler however he can, including an upcoming visit to their project Polar Park. Keep an eye out!