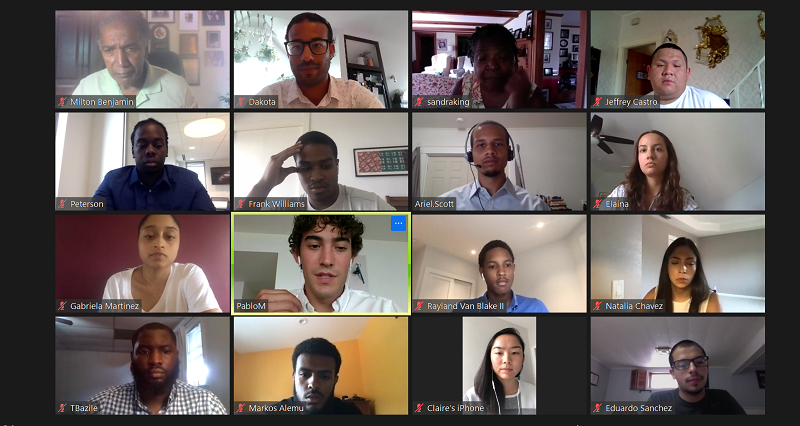 CREST (Commercial Real Estate Success Training) began in 2020 determined to introduce commercial real estate firms to academically accomplished, talented, and motivated college students of color and women through paid summer internships. The continuing goal is to have many of this year’s interns join other CREST alumni as full-time members of CRE firms.

This year would prove to be vastly different than all prior years. By February of 2020, twenty-nine firms signed up for a CREST intern; the largest number in any year. There were more than 50 intern applicants who were finalists in the application process. With the pandemic, the internship opportunities shrank. Understandably many of these employers were forced to withdraw from participating amidst unprecedented financial and safety concerns.   A core group of firms affirmed their participation and were first to hire interns. Like everything else affected by COVID-19 CREST wrestled with whether it could meet its mission.

Motivated by what CREST has become to students of color and women, the academic institutions they come from, and what it hoped and believed the demand for the student’s talent and experience would be in the CRE world, CREST turned to supporters and sponsors for help. Longtime supporters Richard Galvin of Accordia and CV Properties and Thomas O’Brien of HYM Investments along with industry organizations: Corenet, GREB, NAIOP, and ULI called on the industry to help increase the number of firms that would hire interns in summer 2020 and to asks those that could not bring a student aboard to instead help offset the cost of the planning, preparation, and execution of a reimagined internship. That appeal led to 10 firms hiring 11 interns (Tishman Speyer hired 2 interns), as well as, seven other firms providing financial support. The participating academic institutions grew this year and included: Bentley University, Brandeis University, Harvard Kennedy School, NYU Shack Institute of Real Estate, Tufts University, University of Massachusetts Boston, and Wellesley College.

CREST Reimagined became two internships in one. The 11 students were employed and learned on the job. They also received an intensive curriculum filled with presentations and workshops to instruct them on important elements of the commercial real estate industry. The instruction was taught virtually by highly regarded specialists and leaders in the field. The students also had concentrated opportunities to develop vital skills in professional presentations and personal brand management. The internships successfully concluded at the end of August with significant results.

The 2018 and 19 CREST alum, now employed in the field, have committed alongside the Builders of Color Coalition, Corenet, GBREB, NAIOP, and ULI to assist the graduates with their CRE job searches when they complete their academic programs. Additionally, the many Zoom meetings created a CREST 2020 community that, while different from face to face contact, was nonetheless engaging and supportive. The education was rewarding for the interns and presenters alike.  A number of the interns were awarded recognition, extended internships, and full-time job offers. For example, Laura Rodriguez was named Intern of the Week by UMass Boston. Natalia Chavez was invited to be a keynote speaker at the ULI Women’s Leadership Initiative Council. Laura Rodriguez, Frank Williams, and Peterson Philippe have extended internships at Paradigm Properties, MITIMCo, and Oxford Properties, respectively. And Marcos Alemu received a job offer with the Liberty Mutual real estate division, his summer internship home.

This fall, CREST will begin preparing for the summer of 2021. It looks forward to the collaborations that will deliver another class of diverse and accomplished students who, with their skills enhanced, will demonstrate that they and others like them are prepared to join the CRE workforce in Massachusetts and beyond.

Transforming an Industry: How the Federal Reserve made Inclusion a Priority

On August 10, 2020, ULI Boston partnered with our fellow CRE organizations for a deep dive into how making inclusion a priority.